Members prefer to preserve the individual mandate and Medicaid expansion

Kupersmit Research is pleased to present the results of the 2017 CMS Member Survey on federal health system reform. Our survey was written in January (before the AHCA was formally proposed) to gauge CMS members’ attitudes toward potential reforms being considered by the new administration and Congressional leadership at that time.

CMS has surveyed members since 2008 on health system reform; most recently, we focused on system reform in the context of Amendment 69 in 2016. 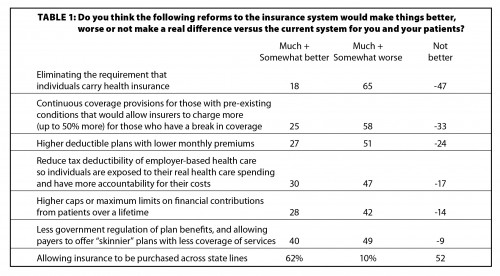 Priorities: Preserve the individual mandate and the Medicaid expansion

CMS physicians have significant concerns about reforms to the current health care system that would reduce coverage and increase costs for patients. We see strong opposition to eliminating the individual mandate, allowing continuous coverage provisions, encouraging higher deductible plans, eliminating the Medicaid expansion and other steps that they believe would make the current system worse for Coloradans.

At the same time, CMS physicians are open and willing to engage in reforms at the federal level, such as allowing insurance to be sold across state lines, if such ideas demonstrably move toward a system of affordable health insurance coverage for all Coloradans. As we saw in the Amendment 69 debate, there is a strong sense that state-based solutions alone are not sufficient to achieve this vision for Colorado (or other states across the nation).

CMS physicians have spent significant time and effort focusing on health system reform for nearly a decade. They are willing to engage in a constructive process to address challenges in the system, and look forward to continuing conversations with interested parties and offering support to those who want to create a more patient-centric system in the days and months ahead.