Kupersmit Research is pleased to present the results of the 2017 CMS member survey focused on member priorities for reforms to the health care delivery system in Colorado.

(Unless otherwise indicated, data below is among physicians in active practice who accept commercial insurance (n=488, approximately 80 percent of CMS members overall). We also focus on “decision-makers” in their practice who participate in contract negotiations with payers, (typically owners/partners in office-based practices; n=113, approximately 20 percent of CMS members).

CMS physicians in active practice who contract with insurance, and particularly decision-makers, express significant frustration with commercial payers and a clear desire for reform: 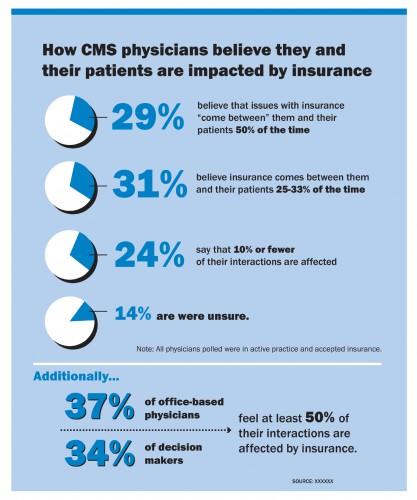 Physicians want local solutions now
Over the years, we have watched as more and more physicians move to an employee role. This survey reminds us that the choice to be employed versus an owner/partner in a physician-controlled practice is being driven in some part by the desire to avoid the hassles and stress of contracting, authorizing and being reimbursed fairly and transparently by commercial insurers.

Physicians across the system report that insurance companies are interfering in medical decisions, and that lack of communication and constant change regarding insurance status are causing problems for patients and physicians alike. Not surprisingly, physicians feel that patients blame them, and that the physician-patient relationship is deteriorating from this ongoing intrusion of financial and administrative hassles into the exam room.

CMS physicians strongly believe that key reforms are needed at the state level, and expect those reforms to directly and immediately impact their practice in a positive way. Their priorities are allowing physicians to file complaints with the DOI, transparency in selection and deselection of physicians for networks, and protection of physicians from retaliation by health plans. There is also strong interest in seeing steps to address the issue of OON billing, as well as ensuring public input and transparency regarding health insurance potential mergers.